This  program calculates the Flux Density of the Solar and Jovian bursts  as a function of the measured temperatures.

Here is a  description of this program:


You can enter a comment in the "Antenna Identifier". This can be useful when you want to take a snapshot  of the window and you used one amongst several  antennas  (Dual-dipole, Yagi, Moxon, Tee-pee,...) and you  want to identify it.

The program will now show the Flux Density, in W/(m²Hz) and in jansky, of the burst and its level (dB) above the background. The Power and Voltage  (across 50 ohm) at the antenna feed point and at the receiver input are also shown. The Isotropic source spectral power and the Source to antenna path loss are shown.

If the user changes a parameter, for example the temperature of the burst or the antenna gain, then the output is automatically updated.

With this version it is now possible to save the results to a text file and to print the screen.

After having downloaded the file, unzip it and run the Setup.exe
If you have installed a previous version  you can just replace the old FluxDensity.exe with the new FluxDensity.exe 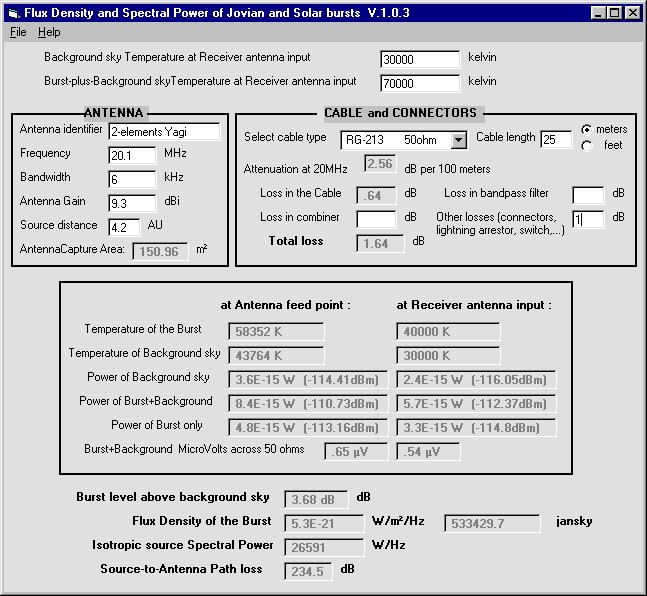 And here are some formulas:

The cable, connectors, filter, power combiner and other devices connecting the antenna to the receiver introduce an attenuation. This means that the power (Pa) of the burst is higher at the antenna feedpoint.

The FLUX DENSITY of the burst is the power landing on Earth on a square meter and per hertz  [W/(m²Hz)]. The associated electromagnetic wave can be linearly, circularly or randomly polarized, its polarization can also vary over time.
It is assumed here that all the power landing on the antenna is collected, this regardless the polarization of the  wave. The Flux Density is therefore given by :

The  ISOTROPIC SOURCE SPECTRAL POWER  is the power emitted by the source on a 1 Hz bandwidth.

SOURCE-TO-ANTENNA PATH LOSS:  by definition the Path Loss assumes that both transmitter and receiver  antennas are isotropic.

After having downloaded the file, unzip it and run the Setup.exe 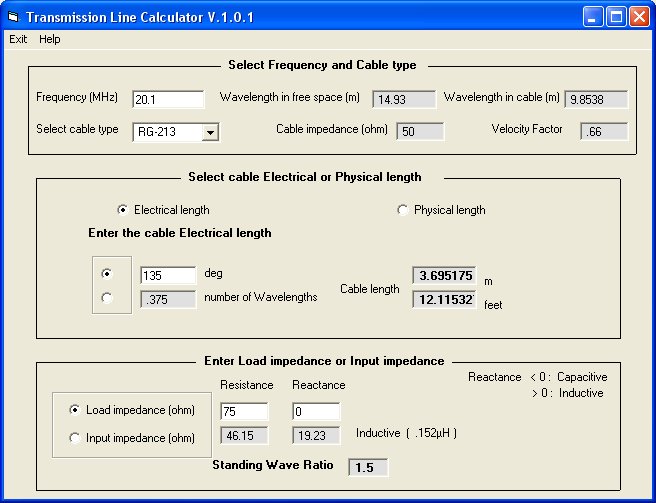 Some theory and formulas:

The physical length (Lphysical) of the cable in meters will then be:  Lphysical = LambdaCable * N  The units of Lphysical will be the same as those used for
LambdaCable.
As an example the "phasing cable" used for the RadioJove dual dipole antenna must  be O.375 wavelength (or 135 degrees) long, with Vf = 0.66 at a frequency
of 20.1 MHz it gives a cable length of 3.69 meters (12.115 feet)

The impedance at the input of a cable when the impedance of the load is known is given by :

NOTE: To simulate an infinite impedance enter a resistance or reactance value greater than 10 Mega ohm

Standing Wave Ratio (SWR) :
The Standing-Wave-Ratio (SWR) is defined as the ratio of the maximum voltage to the minimum voltage along the line.
It is an indicator about the mismatch of the line. A mismatch occurs when the impedance of the load (ZL) is not equal to the characteristic impedance
of the line (Zo)
An SWR = 1 indicates that the load and the line are matched, so that there are no reflections.

Back to the Home Page